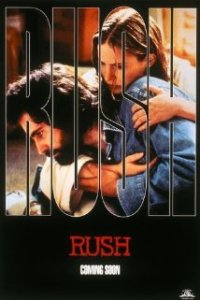 I mentioned in writing about a/k/a Tommy Chong that for the most part I’m anti-drugs, but I’m even more anti-“Drug War.” After watching Rush, I think I’m a little more anti-both.

For its genre—mainstream, conventional, decent-sized budget, crime drama—this is one of the better films I’ve seen. Now that may be faint praise since I’m not a huge fan of that kind of movie, but even beyond that category, if we compare this film with all movies in general, I’d give it a reasonably high grade.

In the first few minutes, some of the dialogue seems phony, and the movie feels vaguely formulaic, but once it settles in, it becomes more interesting. The acting of pretty much all the significant players ranges from good to excellent. The suspense, and the emotional relationship moments are solid, albeit well below the best I’ve seen in other movies I’ve written about. The storyline, if not a hundred percent believable, makes more sense and feels more real than the typical Hollywood product.

It’s got about the right level of obscurity and nuance to it. I think I understood almost all of it, but sometimes it took some effort or the deciphering of some clue. So it was neither incomprehensible nor so dumbed down as to be uninteresting. (Though by the fourth or fifth time the newbie is warned undercover work is ugly and will change her for the worse, I wanted to say, OK, we get it.)

And more than most mainstream Hollywood movies, it has morally interesting situations and dilemmas. Imperfect people in difficult situations partly of their own making have to decide what they will and won’t do to save their ass, whom to be loyal to and whom to screw over, and how much it’s necessary or permissible to violate the law in the service of law enforcement, lie in the service of truth, be violent in the service of opposing violence.

A veteran male cop and his newbie female partner go undercover to buy drugs to nab the dealers in a Texas town. But obviously they can’t just walk up to the bigwig drug dealers as strangers and ask for drugs; they have to establish their bona fides by living the lifestyle of junkies for months so everyone knows they’re “cool.” And they can’t just pretend to live that lifestyle, they have to actually do it, which means using drugs in the presence of the people they’re trying to win the trust of.

There’s the obvious risk that they will thereby develop destructive drug habits of their own, a risk that they fall prey to to varying degrees. Or perhaps one could say that it’s a job that provides the ideal opportunity to do something one wants to do but would otherwise be illegal. (How many cops, for instance, would volunteer for the vice squad if the only way to make a prostitution case stick was to go through with sex acts to their completion with the hottest hookers?) So being a junkie wouldn’t be a risk so much as an opportunity.

There’s a further blurring of who’s on which side of the Drug War when they force a low level scumbag to turn rat and work undercover with them or be sent away to prison for decades. He’s reduced to a guilt-ridden puppet, continuing his life as a junkie and drug dealer, but now beholden to his enemies and having to assist them against his fellow junkies and drug dealers. Which in a way is the same position the undercover cops realize they are in when it’s made clear to them by those above them that they will follow orders and do things the way they’re told if they want to avoid the legal ramifications of their own drug use.

The struggles with drug addiction are powerfully portrayed in Rush, as are the corruption, futility, hypocrisy, and stupidity of the Drug War. As I say, this movie only made me more convinced that both are evil for almost everyone who gets involved with them.