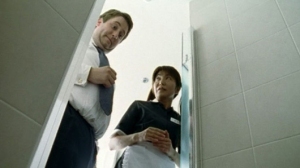 Tokyo Jim is a really fun little British film. It’s a witty, sketch comedy type film that reminds me most of Call Register of the short films I’ve written about so far.

A rather nervous, bumbling young British executive is in Tokyo to close a deal for the company he works for. His counterpart, who must sign off on the final documents, is a distinguished older Japanese man, with a young female assistant/translator.

The Britisher is at a disadvantage in not knowing Japanese and having to rely on the translator’s versions of the Japanese man’s gruff mutterings. We, however, through the miracle of subtitles, can see exactly what he’s saying, which turns out to be an increasingly vulgar commentary on what a boob the Britisher is.

As they’re wrapping up the deal, the woman suggests to her boss (in Japanese) that they should invite the man for a drink out of politeness, which he strongly objects to, since he loathes the guy by now. But she assures him he’ll certainly decline anyway, so he reluctantly agrees.

She then transmits the invitation. The man is a bit flustered because he really wants to get out of there and not extend this uncomfortable interaction, but he fears seeming ungrateful, so he accepts. That sets off angrier mutterings from the Japanese man (which of course somehow become something like “Mr. Yakamuri is honored that you will be joining us”).

Things get progressively worse from there.

It’s funny. Tokyo Jim is one of the top half dozen or so pure comedy shorts I’ve written about so far.