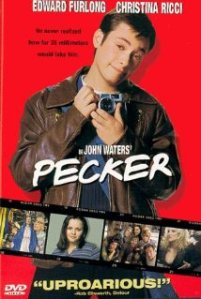 Pecker is one of John Waters’s Baltimore comedies, certainly one of his tamer ones.

The cast is a significant plus. Not just the usual oddball Waters semi-regulars, like Patty Hearst stripping down to her slip and dancing on a bar, but at least four actresses that I consistently like in almost everything I’ve ever seen them in—Mary Kay Place, Martha Plimpton, Christina Ricci, and Lili Taylor. They’re solid as expected here, and for that matter the rest of the cast is fine. They’re all seemingly relaxed and having a good time.

It’s not a particularly edgy or controversial Waters offering, but it was likely fun to be involved in, and that comes through and makes it fun to watch. It’s pleasant, with enough successful silly lines and weird little moments—mostly sex-related—to have kept my interest. But it’s pretty lightweight stuff.

The protagonist, nicknamed “Pecker” for the way he pecked at his food when he was a child, is a young, working class Baltimorean with a happy-go-lucky style, and a penchant for taking his camera wherever he goes to snap candid shots of the people and scenes he comes across. Unlike real life, almost everyone is flattered by his taking their picture, and even the occasional person who gives him the finger does so with a certain amount of good humor, like “Oh, there goes that little rascal with his camera again!”

It’s a John Waters movie, so his family and friends work in gay bars, shoplift for a living, are lesbian strippers, are homeless, or are just quirky in one way or another, like his girlfriend who’s obsessed with keeping everyone within the rules at her laundromat (without proper supervision they do things like hump the dryer—again, it’s a John Waters movie), and his batty grandmother who has her own Virgin Mary ventriloquist doll (who mostly just says “Full of grace! Full of grace!” in a parrotlike voice).

Pecker is “discovered” by a New York art big shot, and soon becomes the latest big thing in the art world. The art folks are taken by the genuine quality of his photography, the way he captures ordinary people unself-consciously doing ordinary things, which to New Yorkers of their circle is as exotic and fascinating as the behavior of primitive tribes in Timbuktu. Indeed, later when a few of them venture down to Baltimore to see these folks in their native habitat, that is very much their attitude.

Along the way there are plenty of decent gags (for some reason I particularly got a kick out of Pecker’s sister getting fired from her job at the gay bar and loudly lamenting “But trade is my life!”), including some about people and things I’ve maybe heard of but know nothing about (“Pecker’s like a humane Diane Arbus!” one critic gushes, and even if, like me, you don’t know enough about Diane Arbus to get it, you can infer it’s Waters taking his goofy little shot at what she and her circle represents to him).

Things turn sour when New York values corrupt the Baltimoreans and take them away from their limited but natural lives, and then reverse themselves when Baltimore values prevail over the uptight New Yorkers and enable them to relax and enjoy an evening of semi-nudity and teabagging at a gay bar. Everyone lives happily ever after.

Pecker is OK. Not as outrageous and probably not quite as good as A Dirty Shame, but OK.