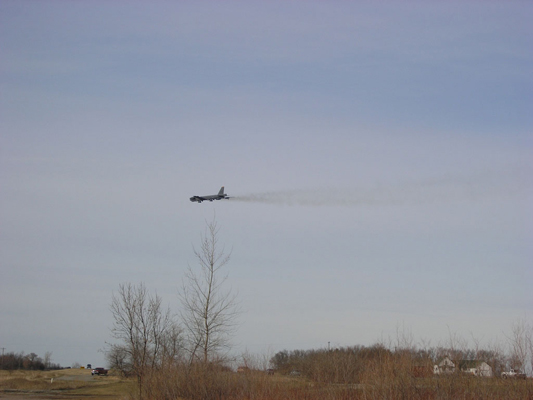 Minot, North Dakota is an 18 minute film that consists of various shots of the town—panning slowly up and down the streets, panning over the surrounding farms and countryside, etc.—while six unseen local resident interviewees talk about the town and their lives over eerie background music. About half of the interviewees sound like adults and about half teenagers, with the younger ones especially coming across as rather dim bulbs.

Minot, with a population in the 40,000s, is a hick town in the middle of nowhere, with a horrible Arctic climate. So what is there to say about it; what reason is there to make even a short film about it?

The most notable thing about Minot, the thing that almost all the comments have to do with directly or indirectly, is the presence of an Air Force base 15 miles to the north, specifically one with a large number of nuclear missiles. One of the adult interviewees works at the base; he is one of the people who will kill millions of people he’s never met and knows nothing about as soon as the order from the president comes down to do so.

Though one of the interviewees is an anti-nuclear liberal, for the most part it is a highly conservative, right wing Christian, pro-military community, the kind of community where a public school teacher assures her students that they can ignore what the media reports, because in fact Saddam did have weapons of mass destruction and so the war against him was justified—he just stashed them in some other country or buried them in the desert at the last minute.

But just about everything eventually circles back to the presence of all these Armageddon weapons. A couple of the younger interviewees speak of how the entire town is under perpetual surveillance, with cameras in the trees and on top of the lampposts and such, due to the need for the highest security to protect the base and its missiles, and how it’s like living in some dystopian police state. (The claims about cameras are offered in kind of a sheepish, “I can’t prove it, but…” manner however, so it’s not clear how much of the description of the paranoia-inducing atmosphere is bullshit.)

For me what the film did is briefly focus my mind on something I’m sure I generally avoid thinking about due to how horrible it is, which is just how close we live every moment of our lives to the self-annihilation of the human race, and how those making the decisions that most increase or decrease the likelihood of that annihilation occurring—U.S. presidents, other world leaders, etc.—are, in terms of intelligence, moral character, emotional stability, and all the other factors relevant to making wise choices in this area, typically worse than if you simply randomly chose people from the general human population to have that influence.

We live in a world where people like Ronald Reagan, Donald Trump, Vladimir Putin, Mao Tse-tung, etc. can at any moment start a chain of events that will kill all or most of the people on the planet, and most other life for that matter.

The human race’s unique collection of traits—intelligence, etc.—has proven extraordinarily adaptive and successful in a natural selection sense in the short and medium term, but extraordinarily unstable and likely unsustainable in the long term. We’re now in that long term.

But again, I hate to even think about it, because I already have enough of a tendency toward depression, and the last thing I need is to dwell on the imminent sudden death of most or all of us due to the colossal stupidity and moral depravity of our infantile species. That is, unless by focusing on it I could change it. Which I cannot.