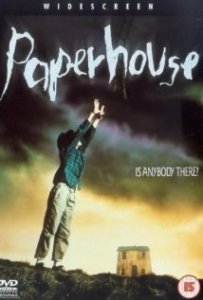 I’ve seen this British movie described as a horror movie, but it’s probably more like 70% fantasy and 30% horror.

On the other hand, if you call it a fantasy movie, then especially given that the main characters are children, you’d probably think of a kids movie—some kind of Harry Potter thing, talking animals, whatever. But that’s not really what this is.

Paperhouse is actually a pretty thoughtful, interesting movie. There are a lot of little angles to it and different interpretations in trying to piece together just what happens and what it all means. I found it held my interest enough to want to figure out.

I’m not an easy sell for movies with supernatural elements. I think they just encourage people even farther in the direction of believing things unjustified by the evidence. But this one didn’t bother me as much in that respect. For whatever reason I was more willing to accept it on its own terms and just follow the story.

The acting in this film is mixed—sometimes fine and sometimes a little stilted.

A young girl becomes prone to fainting spells, falls ill and is bedridden for a while, often groggy if not delirious. She has a recurring dream that feels strangely real, like she’s been transported somewhere. In it, she finds herself in a field, walking toward an isolated house. Eventually she gets far enough in one of the dreams to enter the house, and finds that a boy about her age lives there. He is suffering from some condition that renders him unable to walk.

She notices when she’s awake that her dreams resemble a drawing of a house she has made. When she adds to the drawing, these elements seem to be incorporated the next time she dreams. When she attempts to erase or alter any part of the drawing, for some reason she cannot. She can only add to it.

The boy is sad and not very receptive to her at first. He sees himself as trapped in this place as a kind of limbo. They start to develop a friendship. He warns the girl not to assume that she can keep coming and going at will, because at first he thought that too, so she could get trapped there as he has. He doesn’t specify if he too got there by first drawing this place.

The girl’s father is often away for extended periods overseas, and there apparently are marital problems. Her feelings for her father are complex, and probably she herself doesn’t fully understand them. She misses him and wants him around more, but she also has some uncertainty about him, maybe a wariness, maybe some doubt about their relationship or how he feels about her.

This turns out to potentially be an important factor in why she’s having the dreams she’s having. When she draws him on the same page as the house, and then changes her mind and tries to scribble out part of his face, he shows up at the house the next time she dreams, furiously banging on the door and seeking revenge on her and the boy for the fact that she has blinded him.

So what to some extent had been a pleasant little fantasy story about befriending this mysterious boy in a dream world takes on darker overtones, both in that it appears it might be some kind of limbo or Hell where he and eventually possibly she will be trapped, and in that suddenly her own father has become this malevolent ogre, intent on doing harm to both of them.

To a large extent you could interpret all this as just the delusions that result from a combination of being ill, having strong and mixed feelings about one’s absent father, and whatever else is going on inside her psychologically.

But then there is other evidence that there really is something supernatural going on. She finds out from her doctor that one of the doctor’s other patients is a young boy who very much resembles the boy in her drawing and dreams. She seems to have access to information about the boy’s condition before there’s any natural way she could have obtained it.

The boy in real life is crippled and possibly dying. Has she somehow found a way into some weird spiritual world where people go when they realize they’re dying, a kind of waiting room for the afterlife? Does her presence there mean she’s dying? Can she change the boy’s fate or her fate through what she draws?

So not only is there all the stuff going on in her head that might be giving rise to these dreams or hallucinations or whatever they are, but it appears there’s some kind of supernatural factor added to the mix that’s playing some role.

It’s all presented in a way that makes it interesting to speculate about. Plus the action scenes are done quite well. When the enraged, blinded father is trying to get them, for instance, there’s an effective intensity to it.

The ending brings things together reasonably well. I’m not going to say it’s a hundred percent understandable and coherent and ties up every loose end, but it’s more satisfying than unsatisfying, and the ambiguity it leaves is not particularly objectionable.

I wouldn’t rank Paperhouse real high, but overall I liked it. It’s an unconventional fantasy or horror movie that’s fairly intelligent and works more than not.