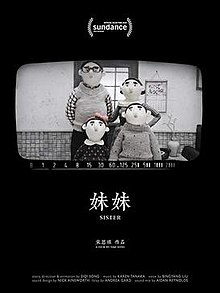 Sister is a thought-provoking animated short film about a family in China.

I don’t have any kind of hard and fast rule about avoiding spoilers in these pieces. With some films especially it’s difficult or impossible to make the points I want to make about them without giving away some plot twists and surprises. Sister is like that.

The narrator reminisces about his childhood, and about his relationship with his little sister, which was at times antagonistic and at times a matter of shared adventures, or misadventures.

But then it turns out that he never had a sister, and that what he’s really doing is speculating about what it might have been like to have a sister. And regretting that he never had the opportunity to find out for real through experience.

Basically the film is about the “one-child” policy that China had for a significant period of time as a way of addressing the nation’s extreme overpopulation problem, and the devastating effects that policy had at a human level, illustrated here by a family member lamenting that his parents had been pressured to abort what would have been his sister and thereby deprived him of a sibling relationship.

I really don’t know much about the Chinese policy, as far as how much of the enforcement was carrots and how much was sticks, what degree of coercion there was to abort children beyond the first, who could get exceptions granted and for what reasons and how just or unjust that was, etc.

So I don’t have a particularly informed or strong opinion about it. I suppose my tentative assessment at this time knowing so little about it is that it was probably an objectionable policy but that I’m not as appalled by it as some people are given that the problem it was trying to counter was a very serious one that needs to be addressed and likely cannot be addressed in a painless way.

As far as the film’s way of making its case against the policy, it’s reasonably effective emotionally, but I’m less swayed by it rationally.

It bears too much resemblance to one of the weakest of the common anti-abortion arguments, which is that an abortion deprives the world—in this case represented by one individual, the narrator—of someone who may have played a positive role, may have done great things, etc. As in, “How do you know that person you aborted wouldn’t have grown up to be another Einstein, or another Beethoven, or another Mother Teresa?” or whoever. In this case, it’s “How do you know that person my parents were forced to abort wouldn’t have been a terrific little sister whom I would have loved and who would have loved me?”

Most people think either that that’s an excellent anti-abortion argument, or that if it’s flawed then the proper rejoinder is something along the lines of “But that person could also have grown up to be Hitler, or Charles Manson, or Donald Trump.”

The latter is an OK response, but doesn’t really bring out the main weakness in the argument. The reason it’s an atrocious argument is that if it were sound, then everything—not just abortion—that prevents a birth would be condemnable.

Birth control would be wrong, because “How do you know the person you never conceived because you took the pill wouldn’t have grown up to be another Beethoven?” Same with abstinence. Same with turning down your boyfriend when you were 14. Same with stopping at seven children instead of having an eighth. (“How do you know that eighth baby that you decided not to have wouldn’t have grown up to be another Einstein?”)

Emotionally, I did feel for the narrator though, and by extension for the family. Because evidently if not for the coercion (and that’s what’s objectionable; all else being equal, the policy was objectionable to the degree to which it was coercive), the parents too would have wanted to have at least one more child. So I can understand why he, and they, feel aggrieved.