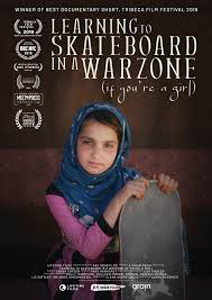 Learning to Skateboard in a Warzone (if you’re a girl) won the 2020 Oscar for Best Documentary Short Film. It tells the story of a school for girls—nicknamed “Skateistan”—in Afghanistan.

I saw the package of all five Academy Award-nominated short documentaries at the theater, and while there is something to be said for all of them, I too would probably have picked this one. It’s genuinely inspirational.

The girls are young—most of them look about 8-13 to me, but I could be wrong. Part of the curriculum is normal academic stuff—reading, writing, etc.—and then a significant amount of time is devoted to teaching the girls how to skateboard.

The film explicitly addresses how radical all this is in the context of a society (that gave rise to the Taliban, after all) with brutally sexist customs based on primitive conservative religious ideology, where women are still expected to function as domestic slaves, covered completely from head to toe including their faces on the rare occasions they are permitted to leave the house.

A few of the thoughts I had while and after watching this film:

Words like “brave” and “courageous” are tossed around quite casually nowadays, most often as a form of self-esteem boosting through excessive praise. (Any celebrity going through the slightest misfortune or bad publicity; anyone who attempts to address—successfully or unsuccessfully—their problems with obesity, alcohol, drugs, etc.; anyone who manages the difficult task of existing while female, LGBT, of a racial minority, handicapped, etc. is routinely lauded as “incredibly brave,” just as pretty much everyone by now is supposedly beautiful and intelligent.) It’s a shame that such words have been so watered down, because occasionally they genuinely apply. These girls, the people who run this school, and the families who allow their daughters to go to this school all deserve to be called courageous in its literal, not watered down, sense.

Precisely because this school is only for girls of families liberal or enlightened enough to deviate from the viciously sexist norm of this society, it’s really not reaching the girls who arguably need it most. That’s not a criticism—you do what you can do, and these folks are doing plenty—but it’s important to remember that as terrific as this place is, it’s a drop in the bucket compared to the wholesale transformation away from ignorance that is needed. (I’d also note, though, that the school isn’t doing zero good for the other girls in this society who would never be allowed to attend such an institution. By providing literacy, confidence, freedom, self-esteem, etc. to a few girls, it’s producing role models and taking very small steps toward normalizing the notion that female human beings are actual people deserving of all the same rights, etc. as anyone else, which indirectly helps those other girls.)

With the caveat that a lot of this can be manipulated by the editing, I’m struck by how open, cheerful, and positive these girls are. In a society like this—with not only its aforementioned extreme sexism, but the war, poverty, death, disease, etc.—I would expect them to manifest far more damage. These are really sweet girls—loving, happy, laughing, and thrilled to be given a chance to learn and to challenge themselves.

The fact that they want to be in school and they want to learn is already refreshing in itself, compared to the norm in the U.S. and most countries where kids go to school because they are compelled to and respond to that deadening coercion the way most folks respond to getting up with an alarm clock and trudging off every day to some rat race, 9-to-5 job they hate. Think of the typical ordinary school gym class compared to these girls and their skateboard lessons; it’s like night and day. I got choked up watching them trying so hard, getting up every time they fall, and looking thrilled enough to burst whenever they attained a new level of accomplishment.

Inasmuch as you change the world by improving individual lives, bless these folks for what they’re doing, and may these beautiful, precious girls achieve each and every one of their dreams.