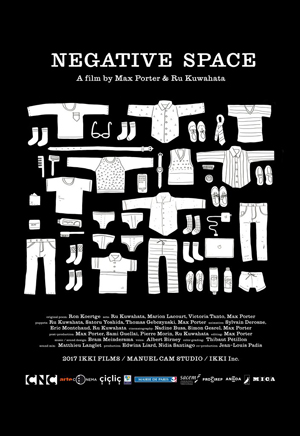 Negative Space is one of those films where maybe people see what they want to see in it. That is, it’s so short (five minutes) that there’s really not that much substance to it, but there’s enough hinted around at that if you have a mind to you can probably interpret it as having interesting or important things to say.

It is an animated story of a man’s recollection of how he bonded—in a quite limited way—as a young child with his father. Because his father was away so often on business trips, one of the few things he recalls that they shared is packing the father’s suitcase together. He remembers eagerly taking in his father’s pointers about the proper way to pack, and how proud it made him feel when he was old enough that his father largely delegated the packing to him, and praised him when he did it well.

You can interpret the closing line of the film as a little bit of humor, or as a meaningful metaphor for what was missing in their relationship.

The animation is inventive and pleasing, and overall the film has a nice feel to it. It’s not something I would rate real high, but it’s certainly worth devoting five minutes to, and thinking about.