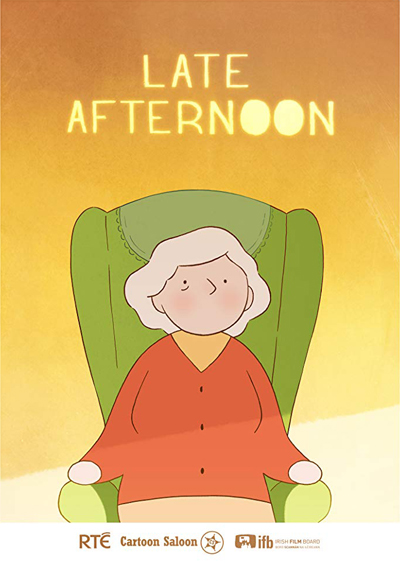 From Ireland, Late Afternoon is a 10 minute animated short film about dementia.

An old woman is sitting in a chair in her home. A younger woman enters and greets her, identifying herself. The old woman doesn’t know who this is, and isn’t sure if she’s supposed to know, but she gathers that she’s there as some kind of caregiver as the woman brings her tea, tidies up, and packs some items into boxes. They interact minimally, always in a friendly, semi-formal manner. The older woman especially seems to be on her best behavior, like maybe she’s self-conscious about her mental state and about needing assistance.

As the old woman drinks her tea, her mind drifts away into various scenes, imagined or real from her past. They are pleasing thoughts of treasured experiences and people she has loved. At times she is brought back to the present, but then her mind wanders again.

The way the film ends is where I guessed it was headed from early on, but that doesn’t make it ineffective. It’s a moving film and a moving ending, and really does provoke thoughts and feelings about dementia, or at least one form or manifestation of it.

It happens to end with one of her more lucid moments, which gives the film a happier, more heartwarming feeling overall, but the thing about mental deterioration like that is you know there are no permanent breakthroughs, no lasting improvements. In a few moments any such lucid period will pass, and her mind will be adrift again. That’s just one of the sad things you have to deal with if you have dementia, or if you’re connected to someone who does.

I appreciate this film. In terms of how deeply it reached me emotionally, it’s in the top 10%-20% of short films I’ve seen.