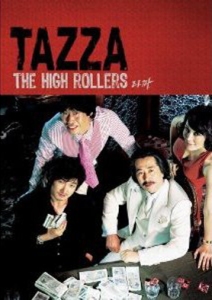 Tazza: The High Rollers is a stylish gambling film, kind of like a Korean Rounders. The principles all play a card game they call “hwatu.” I looked it up later and that appears to be the name for the type of playing cards used in Korea rather than a specific game.

But anyway, what they play seems to be a very simplistic game based almost entirely on reading people and bluffing rather than any particular decision making with the cards. I’m not sure of that, since the way they show it may be misleading, but it appears everyone is dealt two cards, and you bet and win based on the conventional rankings of the two-card hands—a pair being better than a non-pair, and a pair of 10s being the highest pair. So it’s the equivalent of playing “high card.” (Or, again, maybe there’s more to it that they’re not showing.)

I also read that it’s illegal to play hwatu in South Korea, at least in public for money, though people commonly play it at home with family and friends. Perhaps the reason it’s illegal, if this movie is to be believed, is that the game seems to be based on cheating. Pretty much every game these high rollers are involved in is settled by who cheats successfully without getting caught. When the protagonist learns how to be an expert hwatu player from one of the best players in the country, really what he’s learning is card manipulation—dealing from the bottom of the deck and such.

The high stakes hwatu world is also a very violent one. People are killed or maimed—usually getting a hand chopped off—if they’re caught cheating, or if they just piss off the wrong person or are in the wrong place at the wrong time. Indeed it’s so routine that the protagonist Goni is warned multiple times that that is the fate that awaits him if he doesn’t quit as soon as possible, because that is how pretty much all serious gamblers end up. In fact his mentor implores him early in his career to settle for what he has won and get out now, and to chop off his own finger so he won’t be tempted to backtrack on that decision.

So you’re either a sucker who goes broke because you can’t defend yourself against the cheaters, or you’re a skilled enough cheater to win and live like a playboy temporarily before having a body part or two chopped off. I’ve been something of a gambling man myself at times in my life, and I can say with high confidence that that is not a positive expectation scenario.

But I guess the odds seem promising enough to Goni, or perhaps, at first especially, he’s just a compulsive gambler who can’t resist the lure of the gambling world.

Like so many newbies to high stakes gambling, his early experiences are devastatingly bad. He loses all his money, goes home and desperately helps himself to all the money in his family’s house, and loses all that. (He is cheated of course.) He leaves home in disgrace.

After stealing enough money to get back in action, he pursues the wiser course of nagging a great hwatu player to take him under his wing and teach him how to win, until the older man eventually gives in when he sees how serious and dedicated Goni is. From there things go much, much better for him, as he becomes a big winner.

Unfortunately it also draws him deeper and deeper into this corrupt, scary illegal gambling world of gangsters and femmes fatales amidst all the flashy clothes and cars. From there Tazza: The High Rollers becomes a series of shady deals, double crosses, climactic hands, sudden violence, romantic complications, chase scenes, and all that you would expect from a movie of this genre.

It’s all handled at least reasonably well. It’s fairly fast-paced, the twists and turns of the plot get a bit confusing but not incomprehensible, it’s unrealistic but no more than you’d expect from this kind of movie, there’s a little humor, it’s shot professionally with a bit of flare, and the characters are more interesting and distinguishable than in some gangster or crime type movies. I especially liked Goni’s mentor, and his nerdy some time partner whose goofiness I at first took to be feigned to get people to underestimate him but seems to be mostly how he really is.

There are things to like about Tazza: The High Rollers, and I suppose for a movie of this genre it’s above average, but maybe because it’s a genre that I only have moderate interest in, for me subjectively it was just a hair short of being good enough to overcome the burden of subtitles and its over two-hour length.