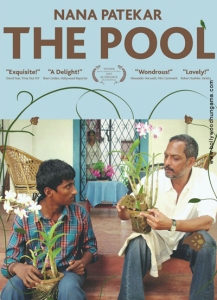 The Pool is an Indian movie, set in the state of Goa, which is a coastal area on the western side of the country on the Indian Ocean. It tells the story of 18 year old Venkatesh, a village boy from the nearby state of Karnataka (i.e., Mysore) who has been working as a miscellaneous hotel drudge in Panaji (i.e., Panjim) for several years.

He makes enough money to scrape by, and to help out his family—whom he periodically goes back to visit—a little bit, but not enough to pay for his dream of going to school (nor for a place to live apparently; in one scene he’s shown curling up to sleep on the floor in the hotel, so I take it he’s homeless). He is illiterate.

His sidekick is 11 year old Jhangir, living a similar life as a restaurant worker. For a side income, they sell plastic bags to people shopping at street markets. The depiction of their friendship is one of the warmer elements of this movie.

Venkatesh becomes obsessed with a rich family that he can watch from up in a tree near the hotel where he works. More specifically he becomes obsessed with their swimming pool, which represents to him the kind of luxury/beauty/success/recreation he’s never had in his life and has no reason to expect to ever have in the future.

The estate with the pool is a vacation home or part time home for a man and his teenage daughter. The man is divorced or separated from his wife, and clearly is not on good terms with his daughter. He seems, in his stern way, to be doing his best to salvage what relationship he can with her, but she is unreceptive. It appears to be a typical “generation gap” teenage thing, though we find out later there’s something specific that happened years ago that is surely a big part of why they cannot connect now.

Maybe to take his mind off his family problems, the man spends an inordinate amount of time tending to the plants and trees all over the grounds of the estate—the garden I guess it is, though it’s a lot more elaborate than what “garden” typically connotes. Venkatesh is able to worm his way into a part time job by volunteering his help in the garden, and then coming by regularly when he’s off work at the hotel.

The man seems largely indifferent to him at first, not really needing or wanting an assistant gardener, but not particularly averse to having one either. As they work together, Venkatesh carries what little conversation there is between them, telling anecdotes from his childhood and such, to which the man rarely offers much response. He doesn’t seem to resent Venkatesh and wish he would shut up, but nor does he take much interest in him. Again, pretty much an attitude of indifference.

But over time, he becomes more fond of Venkatesh and more interested in him. He starts to open up to him, offering bits of paternal wisdom here and there. (Venkatesh tells Jhangir that the man tells him corny stories but that somehow they don’t seem so corny coming from him.) It’s like Venkatesh is giving him an outlet for some of the benevolent guidance that he wishes he could direct toward his own daughter but can’t due to their relationship being poisoned, or that he wishes he could direct toward a son.

Meanwhile, Venkatesh and Jhangir succeed in getting the daughter to hang out with them. They seem to have plenty of time to spend with her, which is odd given that they have full time jobs, have a small makeshift business on the side, and in the case of Venkatesh have an extra part time job as an assistant gardener, but somehow they’re able to free up the time.

I also find it not very plausible that there wouldn’t be more sexual tension. As an 18 year old boy, you’d think Venkatesh would be all about trying to get in the cute, rich teenage girl’s pants, but although he mentions to Jhangir once or twice that she’s hot, that doesn’t really affect how they interact. He isn’t feeling her out, she isn’t reciprocating interest or throwing cold water on his ardor, etc. It’s the kind of non-sexual hanging out you’d expect with three 10 year old boys.

For that matter, the father has no reaction whatsoever to his daughter’s new association with Venkatesh and his friend. You’d think introducing an 18 year old boy into his household and the life of his daughter would have some emotional relevance to him, but there’s no indication it does. He neither welcomes a connection between his daughter and this new boy, nor is threatened by it or trying to prevent it.

I think the filmmaker just happened not to want a subplot involving a teen romance, or a thwarted teen romance, because it didn’t fit with his overall plans for the movie. Which is fine. It maybe loses a modest number of points for realism for treating raging teenage hormones as a total non-issue, but I’m OK with skipping that dynamic. The movie works well without it.

The Pool is a good example of a movie whose whole is greater than the sum of its parts. At any given time while I was watching it, I was only into it to a mild to moderate degree. I would have said it was decent, but mostly pretty slow. Not to mention subtitles make any slow movie even more of a slog.

But looking back on the movie, I actually liked it quite a bit. Over time you make gradual progress in understanding the main human relationships—Kenkatesh and Jhangir, Kenkatesh and the man with the pool, the man and his daughter, to some extent the daughter and Kenkatesh and Jhangir—both what’s positive and successful about these relationships, and their limitations and frustrations, and that’s a worthwhile process because the relationships are intriguing and worth better understanding. The longer The Pool went on the more real these characters felt and the more I cared about them.

Plus the ending is a thoughtful, heartwarming one that worked for me.

So I’m not going to say I would rank this movie all that close to the top of those I’ve written about, but in the end it won me over, on both an intellectual and emotional level. The Pool is a clear winner.