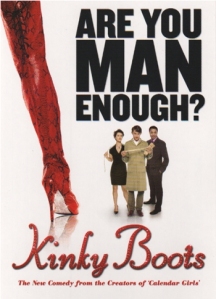 In this The Full Monty-style British comedy, a female impersonator befriends a small business owner who makes shoes, and uses his/her savvy and fashion sense to save his failing business. It’s a fun little uplifting tale, nothing real deep.

Kinky Boots is OK as it is, but one path the film could have taken that might well have made it a more enjoyable and more important one in my eyes would have been to focus even more on the female impersonator Lola, develop that character more, and make it just a little more serious overall.

He/she is the strongest, most interesting character as it is. So I’d like to have seen a little deeper study of that character, with still some whimsical style comedy but not trying for quite as many laughs as this film does.

For whatever reason, the single scene, or really the single moment, that most stuck with me from the whole film is Lola’s look of sadness and vulnerability when he/she must admit to his/her new landlady that he/she is really a man. I felt like I was primed to care about this character and this movie more if it had had more moments like that, moments that convey something emotionally powerful about what it’s like to be the kind of person who lives what is in society’s eyes such an unconventional life.

The other characters are mostly simplistic, with the evil fiancée being especially caricaturish. The storyline too is mostly simplistic and predictable, culminating in about the kind of messages you’d expect from this kind of movie: People should be given a fair chance and judged on their merits rather than being dismissed due to their external appearance or unconventionality, it’s better to save a small business and its jobs rather than to sell out to amoral developers, etc.

Well, at least they’re good, positive messages, so I don’t mind so much if they’re not all that original or complex.

All-in-all Kinky Boots doesn’t live up to its potential, and I wouldn’t recommend going very far out of one’s way to see it, but it’s a pleasant way to spend an hour and forty-five minutes.