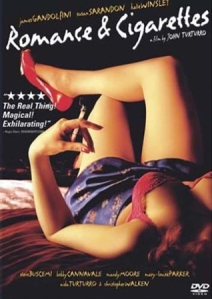 Just as I don’t have a clear favorite movie I’ve seen since I started writing these essays, I also don’t have one I can say is definitely my least favorite. However, Romance & Cigarettes is a serious contender for the latter (dis)honor.

The only reason I watched more than the first five or ten minutes of this is I feel committed when I watch a movie now to see it through to the end so I can write about it. But I knew from very early that this absolutely isn’t my kind of movie, and nothing happened from there to the end of the movie to change my mind.

I thought it was moderately promising going in. It’s directed by John Turturro, who is pretty consistently interesting as an actor at least. Joel and Ethan Coen are the executive producers. It has several big names in the cast, including James Gandolfini and Susan Sarandon, among others.

But boy is it dumb. It’s a musical, with people breaking into song and dance numbers at the most ludicrous times. Even when they’re not singing, as often as not they’re mugging for the camera, talking in goofy accents, and exaggerating every gesture like high school night at the improv. Clearly it’s the intentional “humorous” style of the film rather than just atrocious acting, but it’s still indistinguishable from atrocious acting.

The storyline, insofar as there is one, is probably not as hard to follow as I experienced it, but I was so bored and turned off from so early that very little of it registered with me, so it just seemed like random nonsense.

But I did figure out that it’s about a guy who is discovered by his wife to be having an affair, so he has to choose between his wife and his mistress. Then there are other things going on in his family that are part of the film as well, like his daughter getting engaged. But for most of the time I frankly wasn’t paying attention, because this movie had completely lost me.

I really have to strain to find anything positive to say about Romance & Cigarettes. About the best I can come up with is I laughed at two of the characters, thought they had some good lines—one of the protagonist’s co-workers (Steve Buscemi), and his mother who visits him in the hospital to berate him.

In fairness, what I really dislike is this type of movie, rather than this specific movie. For people who like quirky musicals like this, it may well be quite good. Indeed, it probably is, given all the star power.

But I just got nothing out of it.