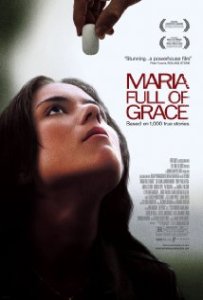 I thought Maria Full of Grace was a reasonably well done movie, and it mostly held my interest, but from the reviews I read beforehand I honestly thought it would hit me harder than it did.

It is the story of a seventeen year old Colombian girl who decides that delivering drugs to New York as a mule is the least bad of her available life options.

Perhaps the part of the movie that spoke to me the most was the very first section in Colombia. She works at some kind of a floral warehouse removing thorns from flowers all day. She is treated poorly, as is to be expected given the power dynamics of the employer versus employee in a non-union environment, especially in a Third World country. One supervisor in particular is abusive toward her, humiliating her by limiting her trips to the bathroom when she’s sick and such. She eventually has enough and quits.

But, as her family angrily tries to impress upon her, that’s not a responsible thing to do in her circumstances. Jobs are hard to come by, and she’s unlikely to get anything as good or better, so, they tell her, she needs to humble herself and apologize to the supervisor and beg for her job back.

She has a good chance to be rehired, they believe, as a defeated employee is better than one who never rebelled in the first place. Let them know they’ve broken you, that you now realize what has to be, and that you’ve made your peace with it. If you know your place, and your superiors know that you know it, then you may be permitted to subsist.

In addition to having enough pride to not want to be shit on at work, she also is in some degree of conflict with her family. Plus she is in the process of possibly breaking up with her boyfriend, by whom she’s recently learned she is pregnant (though truth be told, the break-up is at least as attributable to her own immaturity and irrationality as to anything he’s done).

Given the unsatisfactory and unpromising state of her life, she’s receptive when a guy she meets in a bar pitches to her the idea of being a drug mule.

She is given some pointers by another girl who has already made two such drug runs. (Though why they aren’t instead giving each other pointers on trying out for the Miss Colombia pageant is beyond me. It’s hard to believe drug mule is the best option available for women who look like these two.) Also joining them, though the protagonist strongly discourages her, is a friend of hers from the floral warehouse who is emotionally dependent on her and insistent on being included in anything she does.

As riveting as anything in the depiction of their subsequent misadventures is the sheer physical discomfort of it all.

The drugs are placed in dozens of capsules wrapped in condom-like latex. They are lubricated and given to the mule to swallow whole. If any break and all the contents are released into the person’s system, it can be fatal. It’s hard not to be queasy just watching them trying to force them down.

Then they’re very uncomfortable carrying all these capsules in their stomach on the long flight, where any they shit out too early they must clean up and swallow again.

One of the capsules does indeed apparently split inside one of the girls, with the expected scary consequences.

Dealing with law enforcement at customs, being stuck in a hotel room with scary drug traffickers until all the capsules are recovered, being in New York as a scared stranger who speaks no English—it’s all realistic and compelling enough, but as I say, never quite as powerful as I might have expected.

Watching how it all plays out caused me to reflect on the fact that choices have consequences, that the dubious things you do not only can destroy your own future, but damage a lot of other people in your life.

It’s one thing to take a stand on principle to refuse to be treated with extreme disrespect. Whatever grief that leads to, I don’t think the fault can justifiably be laid at that person’s door. But once you decide running drugs isn’t contrary to your self-respect, and you let yourself be tempted by the large sums of money you think you can make, you more fully own the consequences of your actions.

Overall, Maria Full of Grace a worthwhile film. And I do appreciate that they didn’t try to get too cute and artsy. The storyline is clear and understandable from start to finish; you pretty much always know what’s going on.