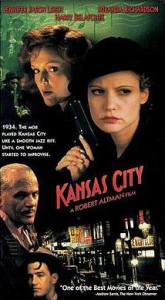 I’ve seen a small number of Robert Altman films. I wouldn’t say on average I’ve liked them more than the average of other films I’ve seen. Probably about equal or a little less. Also, though he’s supposed to have a distinctive style as a director, I don’t have much of a feel for that. If I saw a movie without knowing the director, I wouldn’t be able to identify it as an Altman film.

Kansas City I take it is considered one of his lesser efforts. It takes place in, of course, Kansas City, in the 1930s. An erratic, misguided “gun moll” type kidnaps a prominent official’s wife, with the intention of getting the powers that be to somehow intervene in a petty crime squabble between her husband and a black crime boss/night club owner who is holding him and threatening to kill him. Over time the kidnapper and the kidnapped grow closer and sympathize with each other’s position, as they interact with various characters from other intersecting subplots.

Political corruption, race relations, other social issues, and jazz music are prominent in the story to varying degrees, though really just to provide atmosphere; they aren’t delved into in any significant way.

The movie is confusing in parts, but not horribly so. I didn’t get the ending. My only guess—and it’s really a guess—is that it’s supposed to be like the ending of One Flew Over the Cuckoo’s Nest where one character kills another who wouldn’t want to live the way they now must. So a kind of assisted or proxy suicide. But I don’t know.

The movie this most reminds me of that I’ve written about so far is Miller’s Crossing. It’s a gangster movie set in the 1930s, but it’s really not modeled after people in the 1930s so much as people in movies in the 1930s. So it’s more of an homage to or satire of a certain movie genre than an attempt to be realistic. And that style just isn’t a big winner with me, in the case of either of these movies.

Kansas City is probably slightly the more realistic and less tongue-in-cheek of the two, with one glaring exception. Jennifer Jason Leigh as the kidnapper is a complete caricature. Totally over the top, strictly playing a “type” rather than a person. I thought her playing the part that way was grating and detracted from the film, though I acknowledge it’s possible she played it exactly the way the director intended.

Harry Belafonte as the crime boss, though also not particularly realistic, I actually found to be an enjoyable attention-grabbing acting job.

There were a few moments toward the end especially when the kidnapper is more emotionally vulnerable, talks about her love of her husband, talks about the child she gave up for adoption, where I felt more and the movie drew me in a bit. There’s no indication the husband is any great shakes, but it was kind of one of those cases where the love itself is impressive and worthy of respect regardless of whether the object of it is. And it’s kind of interesting seeing the kidnap victim recognize that too, and silently compare it to her own loveless marriage.

But overall, I’m going to say Kansas City is below average. I did like the music though.