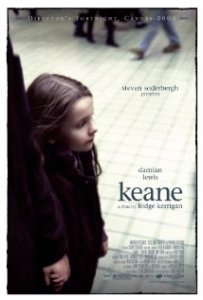 Keane isn’t as extreme in its starkness, methodical foreboding pace, and inclusion of mundane behavior as Day Night Day Night, but it’s one of the very few movies I’ve seen that’s at least vaguely of that type.

It’s a study in mental illness in a sense, but what I appreciate about it is there’s little if anything (I think) that you see and hear that isn’t real. In so many movies, like I’m a Cyborg, But That’s OK, Leolo, Vital, Buddy Boy, etc., the delusions of one or more of the characters play out on the screen, so you never know whether to trust what you’re seeing. As I’ve noted, that “here’s what the world might look like if you were crazy” approach is one I mostly don’t care for.

By contrast, in this movie we’re observing a person and trying to determine to what extent he’s crazy, which is much different, and something I can better sink my teeth into.

The title character is first seen wandering around the Port Authority bus terminal in New York, accosting passersby and employees, waving a tattered newspaper clipping at them, imploring them to tell him if they know anything about his seven year old daughter who was abducted by a stranger when he was at this terminal with her six months earlier.

He seems to believe—to the extent that any coherent beliefs can be attributed to him—that his daughter and the abductor are still in the building somewhere, or that they return every day at the time she was snatched. So in addition to questioning people, he peeks around corners trying to “catch” the bad guy.

He spends a lot of time muttering to himself (maybe 40% of which I could understand—it’s possible he says things I missed that would be important clues in understanding him or the events of the movie), occasionally screams, and in one instance physically attacks a stranger he’s momentarily convinced is the abductor.

When he’s not wandering the bus terminal looking for his daughter, he’s most often drinking, doing drugs, or on one occasion screwing a woman in a bar restroom. (The latter is as soulless, as non-intimate a sex scene as one can imagine. He is totally in his own world and seemingly has zero awareness of his companion’s humanity; she’s almost as detached from his humanity.)

He lives in a skid row hotel, one of those dives that exploits desperate people who are forced to pay an inflated daily rate because they can’t come up with rent plus deposit in a lump sum for a real apartment. He seems to be surviving tolerably well on disability checks. He is shown looking for work once, but with no particular urgency.

Through it all, Keane is on camera virtually without a break for the entire movie, generally in close-ups that are as uncomfortable as they are intense.

What so far has been a mostly intellectual exercise of trying to figure him out and determine just how crazy he is and predict what he might do next, takes a turn into a creepier form of suspense when he insinuates himself into the life of a woman and her seven year old daughter down the hall.

She’s wary of him and his offer of modest financial assistance at first, but she gradually lets him in, though not letting it develop fully into a dating relationship, as she’s still “trying to work it out” with her daughter’s father who left her to go upstate.

Even though he’s somewhat more on his best behavior around her, he’s still a visibly odd guy, so she probably lets her guard down a little too much a little too quickly.

But then she surpasses that with the stunningly irresponsible decision to ask him to babysit her daughter for a few hours. (This is a guy she met a few days ago in a skid row hotel.) Then to make it worse, she instead disappears for more than 24 hours. Turns out while we as viewers are seeing her and her daughter as the potential victims in this scenario, she’s coldly manipulated him into the “nice guy” role of platonic friend who’ll do her favors while she heads up north to be with her husband/boyfriend.

Clearly she’s a fool and a terrible parent, but then again you really don’t know what’s happened in her life to bring her to this point. You can infer it’s pretty bad, though, given where she finds herself. It’s hard to imagine any set of circumstances where the choices she’s making (leaving her daughter with a virtual stranger, desperately trying to get back with a guy who dumped her, etc.) are the best available to her, but I suppose I could imagine her circumstances being so awful that they’re not so very far from the top of the available options after all.

That her life could be so desperate as to make her behavior even remotely close to reasonable is a harrowing thought.

His motives—if any, if he’s not just acting randomly and impulsively—are never completely clear. He certainly seems equally or more interested in the daughter than in the mother (not surprisingly, given her age and his back-story). But he does have some jealousy or some resentment when he realizes the mother has been using him to better her chances to get back with her husband/boyfriend and that he’s to be cast aside when he ceases to be useful in that regard.

He’s at his best when he’s alone with the little girl. That’s when he most seems able to communicate with another human being, able to make a genuine emotional connection. She’s clearly a bit shell-shocked by her life experiences, but has a warm and loving nature.

It’s a wonderful acting job by little Abigail Breslin. She’s real, she’s vulnerable, she has a beautiful heart (displayed especially, touchingly, in the final scene). I like the fact that some of the dialogue seemingly plays no role in moving the plot forward, but is just ordinary stuff a thoughtful seven year old might say. (I’m thinking, for instance, of her describing making a friend and then how the friend called her stupid and made her feel bad.) Very real.

He seems to treat her very well and to genuinely care about her. He’s patient and caring toward her, and a good listener, like he’s trying to manifest all the good parenting skills that he’s had to hold inside himself since losing his own daughter. He never acts overtly sexually toward her (though it’s certainly unnerving that she’s showering in front of him).

But then, confused and upset by the mother’s treatment of him, he takes the little girl to his bus terminal on false pretenses, apparently with the intent (again, if he can be said to have any coherent plan) of taking off with her and trying to parent her better than her mother has been doing (which may not be too high a standard).

Really you don’t know how much of his story about his daughter’s abduction is true, and you don’t know precisely the nature of his mental illness, what he’s capable of with this little girl, etc.

He does mention once (to himself, while muttering), that he was only married two years, so evidently if he was at the bus station six months ago with a seven year old daughter, it was well after a divorce. But did he ever really have a daughter? Was he ever married? Has he been in an institution until recently? Has he gone off his medications? Is he himself the abductor, having previously snatched one or more little girls like this one, and somehow reversed it in his mind? Is he a child molester, or a murderer, or both?

My money is on: He was married and had a daughter. His mental illness cost him his marriage and custody of his daughter. In his mind it’s somehow connected with this terminal; perhaps he went through this terminal on his way to and from the courtroom the day the judgment was rendered that he’d be allowed no further contact with his daughter. That’s my guess.

The ending is abrupt, and a little frustrating in that things aren’t really resolved. We’re given some indication of what he’s going to do as far as running off with the little girl, but nothing definitive or irreversible, and we’re left with no more than speculation as to all the issues that have been raised about him and his past.

I suppose I would have preferred a little more information, but I didn’t hate the ending.

The movie as a whole, like Day Night Day Night, is often slow and a bit taxing to watch, with its scenes of him brushing his teeth, walking around wild-eyed and uncommunicative, etc. Not exactly non-stop action and information. But of course it thereby creates its intended mood, and it’s that weird, creepy feeling that makes the movie as intriguing as it is.

So I won’t say I thoroughly enjoyed it from start to finish. But Keane’s intensity, and the pitch perfect, sweet vulnerability of the little girl, place it at least in the top half of the films I’ve written about so far.