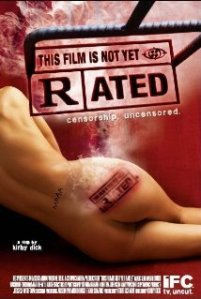 This Film Is Not Yet Rated is a pretty darn interesting, and at times funny, documentary.

The subject of the film is the Motion Picture Association of America (MPAA) rating system. You know, the G, PG, R, and all that. The filmmaker, Kirby Dick, clearly thinks the system’s a load of crap, and he makes a pretty good case that that’s exactly what it is.

The secretive MPAA rating board of blue noses consists of a dozen or fewer members who are all said to be parents of children within a certain age range, and to only serve for a certain maximum number of years. Both of which claims are false, by the way. Actually just about everyone connected with the organization seems to be a congenital liar, up to and most definitely including Jack Valenti, its long-time head. He and his cohorts are every bit the slimy Machiavellians that any other corporation and its lobbyists are.

The MPAA functions as a de facto censorship board, in that how they rate a movie will determine where it is shown and under what restrictions. An NC-17 rating (the equivalent of the former X) means, with rare exceptions, major studios won’t distribute it and won’t budget anything to market it, and theaters won’t show it.

So, moviemakers self-censor to try to avoid the NC-17, and then if they get it anyway, they can censor their own work some more and resubmit it, in the hopes it’ll be deemed sanitized enough to pass muster.

This is one of the respects, by the way, in which the major studios have an advantage. If one of their films gets an undesired rating, the board will tell it specifically what it would need to change to get the rating it wants. Whereas if it’s an indie movie, they claim they aren’t allowed to reveal that information, and you’ll just have to guess and resubmit it.

I mentioned it’s a secretive board. They make a big deal about that (and it leads to a humorous thread that runs through the movie, where Dick hires private investigators to surveil their offices, follow them home, go through their garbage, etc.), claiming that that’s key because they want to keep the members from coming under pressure that could affect their decisions. Except the major studios know who they are and consult with them, so what they really mean is they don’t want any influence coming from the public, the press, political groups, independent filmmakers, etc.

One interviewee says what they do is a clear violation of the First Amendment, that if it were ever challenged in court they’d lose a one-sided decision.

Speaking as a non-lawyer, I’m not so sure. This is one of those situations where the combination of multiple parties freely exercising their rights creates a situation that stifles certain expression, which is different from directly, coercively preventing that expression. This is more like the “coercion” of the “invisible hand” of the market; the end result is the same, but it’s not clear any specific party is violating anyone’s rights. (Should the MPAA not be allowed to express an opinion about movies? Should studios and theaters and such not be allowed to voluntarily alter their behavior in response to those opinions?)

A lot of the interviewees are filmmakers relating their frustrating experiences with the MPAA. It’s a cliché but true that the board is far more put off by sex than violence. It’s interesting too, as one respondent notes, that to the extent they do frown on violence, it’s only when it’s particularly gory, with lots of blood and guts and people writhing in pain. Whereas you can actually make a case that it’s more damaging for kids to see a lot of “clean” violence, where people get shot and fall over dead like in a video game, and you don’t get any sense of the true consequences of violence. Maybe what’s really offensive is for depictions of violence not to be traumatizing to children.

But, again, it’s sex that freaks them out. Especially anything they think is “weird,” like gay sex, multiple partner sex, fetishes, etc.

It would have been nice to see some of the specifics backed up by more than anecdotes and impressions. Multiple interviewees indicate that it seems like depictions of female sexual pleasure (like showing a woman’s face contorted by the pleasures of orgasm for too long) lose you more points than comparable depictions of male sexual pleasure. And that suggestions of a female receiving oral sex are dealt with more harshly than suggestions of a male receiving oral sex. (Obviously any actual rather than suggested sex act is strictly forbidden.) Which sounds plausible, but not much evidence is offered.

The absolute funniest moment of the movie is when South Park’s Matt Stone speaks of their efforts to game the system. They knew the board would object to the ludicrous scenes of puppets having sex in Team America: World Police, so in order to put themselves in a better haggling position, they purposely went much, much farther than what they intended to include in the final film, so they’d have plenty to negotiate away. As he’s saying this, we’re seeing some of these wildly over-the-top scenes from the draft version. And, let’s just say puppet golden and brown showers are funnier than they sound (and they sound pretty darn funny, so that’s saying something).

I wonder if those scenes being excerpted into this movie is what leads to maybe the second funniest part of the film, which is Dick’s unsuccessful efforts to avoid an NC-17 rating for his own film. Or, more chillingly, is it the very fact that it’s a movie criticizing and poking fun at the board?

Occasionally the film widens its scope to look at other respects in which movies and artistic expression in general are suppressed, such as the fact that the much sought after cooperation from the U.S. military for action movies comes with the price of letting them censor the content, and the alarming consolidation in the entertainment and information industries to where a handful of mega-corporations now own the vast majority of movie studios, TV stations, book publishers, newspapers, etc. Unfortunately, while those are very important issues worthy of documentary treatment, those sections are mostly unsatisfying here, because there’s really no time to go into them. So it’s a case of the filmmaker biting off more than he can chew.

As I write, I’m thinking of a lot more from This Film Is Not Yet Rated worth mentioning, but there’s no need for me to tell the whole thing. But that’s a good sign right there that the movie kept me engaged and had a lot of memorable moments.