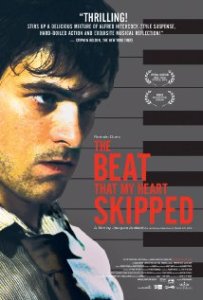 There’s a fair amount to like about the French film The Beat That My Heart Skipped. I got into it to only a moderate degree, but I’d give it a thumbs up.

It’s not uncommon in movies for the protagonist to be someone who is operating at a level well below their potential, and then the story is about whether and how they’ll mature, improve their moral character, succeed financially, extricate themselves from a bad situation, whatever. Looking for Leonard is one of many examples I’ve written about here. Actually I suppose any “coming of age” story about a teen or young adult changing their life as a result of some new insight and maturity would also be an instance of this.

In The Beat That My Heart Skipped, what we have is a shady, low level gangster type who is a gifted pianist. He has at least some conscious desire to go where his better nature is leading him, which is pursuing music instead of crime.

I’m not a hundred percent clear on the nature of his criminal lifestyle, by the way. I know he vandalizes buildings, releases sacks full of rats in them, etc. when tenants aren’t paying the rent, because it works better than going through cumbersome eviction proceedings. (These are buildings he or his father own, or in some cases perhaps others who hire him own.) But I’m not sure if the destruction is sometimes for other reasons besides non-payment of rent. Like maybe to collect on insurance, or to get people out of rent controlled apartments, or to bring down the price of buildings they’re trying to buy, etc.

The film contains some interesting relationships, crisp dialogue, and occasional humor. (And beautiful women. Why don’t I have a French girlfriend? I’m struck by how sexy the women are in the French movies I’ve watched lately.)

I liked the relationship between the main character and his father, the way the paternalism is gradually shifting to where the son is looking out for the father.

I liked the fact that the woman who is training the main character for his piano comeback speaks Chinese and no French, and he speaks French and no Chinese, and yet they talk back and forth at the air when they’re together, even at times losing their tempers and berating each other in mutual incomprehensibility.

I liked that the bloody and violent parts of the movie were few and therefore more striking and effective.

I looked at some reviews of this film, and both the favorable and unfavorable ones all seem to have good things to say about the American movie it’s based on—Fingers with Harvey Keitel. So if that one’s as good or better, I’m sure it would be worth seeing, especially since an American movie without subtitles would surely be more understandable and just an easier watch in general.

I’d probably rank The Beat That My Heart Skipped around the middle of those I’ve written about so far.