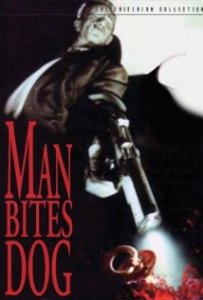 For a two to three year period when I was about 19 or 20, one of my best friends was a highly intelligent, offbeat, cynical guy who was hip but also able to step back and socially comment on hipness. I suspect he, and a few other young people I knew over the years who were vaguely like him, would have loved Man Bites Dog. For that matter, when I was that age, I would probably have liked it somewhat more than I did seeing it now, though I doubt I would have been into it in a big way even then.

But it’s a young person’s movie, the kind of movie cool college kids and such congratulate themselves for having the intellectual and artistic acumen to “get.”

I on the other hand—or my present self at least—thought it started as a mildly interesting idea but turned out to be mostly a waste of time.

Man Bites Dog is a Belgian black comedy mockumentary about a serial killer. It’s in grainy black and white, and all shot amateurishly with handheld cameras by a supposed film crew following this person around as he robs, rapes, and, especially, kills people seemingly all day every day.

The movie has a lot of violence played for shock value, though generally silly or surreal enough that it’s presumably intended primarily to elicit laughter in the sorts of folks I described above. But the shootings spray plenty of blood and brains, and the camera is not shy about lingering on the countless mangled corpses.

I think there are some serious points the movie is trying to make, though I won’t pretend I know more than roughly what those are. I’ll get to those shortly. But I’m sure a lot of people enjoy it just at the level of the violence being so extreme and goofy as to be funny.

It’s definitely not the kind of pure comedy Eating Raoul is. It’s obviously not a serious crime movie like Dahmer or Silence of the Lambs. It’s probably more on the level of American Psycho. It’s also somewhat similar in tone to Natural Born Killers, and especially resembles it in subject matter (the role of the media in sensationalizing mass murder). Natural Born Killers is obviously far more “Hollywood” though, and I suspect some fans of this movie would dismiss that one as more pretentious, more preachy and obvious in its messages.

I suspect this film could have worked better as a short. Once you get the basic idea that they’re doing a “reality show”-type movie about this psychopath, and once you get a feel for what aspects of the social context are surreal and satirical rather than intended to correspond to the real world, there’s not much else to it. I mean, I don’t see that they ever really develop that initial idea. There’s little in the way of a story, and frankly I found it more boring than anything watching him murder people in cold blood one after another. Just a lot of grim repetition—and in black and white with bad picture quality and often in dark or shaded surroundings, so visually obscure and taxing to watch. (Not to mention the subtitle factor.)

One of the ways its proponents could argue it does indeed develop relates to its treatment of media coverage of crime and violence. From the beginning the camera crew is unrealistically non-judgmental and willing to let horrible crimes occur without intervening, but the deeper it gets into the movie, the more actively they cooperate and participate in the crimes. So they go from just filming him, to letting him use their telephoto lens to give him an edge in a long range shootout with another gunman, to helping him dispose of bodies, to enthusiastically participating in a gang rape of a wife in front of her husband before he murders them both. So one can say that that gradual change over many incidents would have been difficult or impossible to convey in a short.

Still, it’s almost all repetitious violence, with random bizarre humor scattered throughout, some of which seems to have little to do with anything. For instance, I can imagine people just busting up over the lengthy and foul-mouthed exchange between the killer’s hospital roommate and a nurse about cleaning him after he soils himself, but if that has anything to do with the rest of the movie, you couldn’t prove it by me.

But as to this point about the media being somehow complicit in the violence it covers, I don’t know that I totally disagree, but that gets little more than a shrug from me. I don’t see that the news media or movies or whatever are even vaguely like the camera crew in this movie. I understand it’s satire so they’re not supposed to literally be like this, but I don’t see much connection even once you adjust for the exaggeration factor.

I mean, are there points to be made against how the media covered the Rodney King beating and riots, the O.J. Simpson saga, or even a natural disaster like Hurricane Katrina? Is some of the coverage of such things exploitative in some sense? Might some media stories have bad consequences in that they glorify and unintentionally encourage violent behavior? Probably so.

But I think the flaws tend to be subtle and arguable, and I think a lot—probably most—of the people involved are well-intentioned. I’m sympathetic to media criticism like that of Chomsky, where the problems are mostly a matter of subtle biases and blind spots based on subconsciously internalizing the values most agreeable to those who have the power to reward and punish journalists. But I just don’t see media members and moviemakers and such as so beyond the pale crazy and/or stupid and/or tendentious as to deserve the kind of satirical skewering they get in this film. (Unlike televangelists, right wing shock jocks, and some other groups.) I don’t see what they do as even remotely analogous to joining in gang rape and murder.

Probably the movie is not just lampooning the media’s sensationalism of violence, but condemning society in general’s acceptance of horrific levels of crime and violence as normal and unchangeable.

I don’t necessarily agree with that point, but I’d say something related to that is the most valuable thing I took from this movie. I saw the film as an opportunity to reflect on something that may or may not have been one of the things the people who made this movie intended to provoke thought about.

I don’t know that most people are too accepting of the kind of violence depicted in this movie. Again, even allowing for the exaggeration or satire factor, I think most people aren’t at all shy about opposing and condemning serial killer style, out of control crime spree style, violence. I don’t think they’re blasé about it because they see it on TV all the time or whatever.

But what the movie put me in mind of is something I speculate about periodically, which is: “What would a man from Mars without prejudices and blind spots based on having been acculturated the way we have think about the world we’ve created? What would a totally objective person be outraged by that not enough of us are particularly fazed by?”

In the movie, not just the camera crew, but pretty much everyone else is tolerant to a surreal degree of this person’s “lifestyle.” Evidently his behavior is interesting or controversial enough to warrant a documentary, but it’s not like people condemn it as unambiguously evil. It’s more like “Oh, we don’t really talk about his work,” or “Well, everybody’s got to do something,” or “I can see how some people could have a problem with it, but what are you going to do?”

Now even if that doesn’t correspond very well—in my opinion—to real life attitudes about conventional violent crime, might it correspond more to our attitudes toward certain other things our objective Martian could see as being just as worthy of outrage?

You know, maybe the way most folks are indifferent to the avoidable starvation of vast millions of people in other countries, and the rationalizations they come up with to justify their inaction when it’s brought to their attention, should strike us as just as absurd as the way the people in this satirical movie react—or more often don’t bother to react—to a mass murderer in their midst.

Some people on the left might see society’s acceptance of meat eating and the abuse of animals as being analogous to what is depicted in this movie; for some people on the right, it might be the issue of abortion and what they see as the moral cowardice of those in the center who disapprove of abortion to at least some degree but are “pro-choice” in that they don’t want that position imposed on others.

Or I’ve always contended that a lot of people who have jobs that are perfectly respectable and acceptable in a capitalist society probably add as much or more avoidable human suffering to the world as the fellow in this movie going around shooting people every day. It’s a much more indirect form of violence than what is depicted in this movie, but a lot of the decisions bankers, lawyers, lobbyists, business owners, etc. make have pretty dreadful ramifications.

But people acquainted with, say, a business owner who cuts corners in disposing of toxic waste, or plays games with the health coverage he’s supposed to provide to his employees, typically react not unlike the friends and family of the murderer in this movie. They accept him, they socialize with him, and they don’t concern themselves more than superficially with his work.

Anyway, this is probably getting pretty far afield from what the filmmakers intended or what most of the audience for this film would think about as they’re watching, but that’s what came to mind for me—speculations about what real people might be inured to and react inappropriately to, the way the people in this movie are about mass murder.

Because other than that, I didn’t see much of anything worthwhile in this movie. It was slow and hard to watch, punctuated by moments of extreme violence that I didn’t find amusing like I take it we’re supposed to. It was like my reaction to American Psycho—I don’t think whatever satirical purpose this violence supposedly serves justifies it. Especially the gang rape scene.

Violence in a movie like Turtles Can Fly is painful to watch, but in a way that I appreciate. I’m not convinced there was enough of a point to the ugliness in Man Bites Dog to warrant sitting through it.