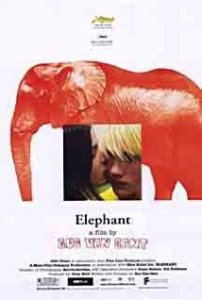 Elephant depicts a fictionalized school shooting, based loosely on the Columbine massacre. It is by Gus Van Zant, whose Paranoid Park I wrote about recently.

And it bears a lot of similarities to Paranoid Park. I had the impression at least some of the teen actors were amateurs, as the performances are somewhere between bad acting and the non-acting of real teenagers being themselves. The dialogue is often painfully juvenile and trite, with the gossipy girls seeming the most like a parody, but then again, I think real teenagers pretty much talk like that.

In this movie too there are long stylistic sequences that don’t move the plot along but just provide atmosphere and tension. Most often this consists of long, long shots of a student walking down a hallway. And like Day Night, Day Night, but not nearly to that degree, we are shown people doing the most mundane things, like a student changing her shirt.

For whatever reason, the long artsy sequences tried my patience a lot more in Paranoid Park. I don’t know that I’m prepared to say they are a positive in this movie, but somehow they give an interesting feel to the movie and at times ratchet up the tension.

The general structure of the movie is to follow various students through a school day, doing their various banal activities. It’s like 11:14 in that it covers the same time period multiple times, following different characters each time, with the different narratives intersecting.

As I watched this movie, I found myself kind of wishing I hadn’t read ahead of time that it ends with a school shooting. Then I think the first clues of it would have had more of an impact on me. As it was, the whole time I knew what was coming.

On the other hand, had I not known that that was coming, I probably would have been more bored and would have had trouble paying attention to these mostly bland people doing such commonplace things, and being shown doing them in more detail and at greater length than in conventional movies. Instead it all has a portentous feel to it. Though I knew what was coming, I didn’t know precisely when or precisely what form it would take, so throughout all the banal stuff the tension is building.

Then once the shooting starts, it is quite arresting. That part is handled in a way that pulled me in, really put me face-to-face with something genuinely horrible. And I’m sure it’s also more powerful like that because you know it’s based on real events; it’s not like some wholly fictitious slasher movie or something.

I rather like the fact that there’s no discernible pattern as to who will end up getting killed and who will not. Some of the people we get to know get shot and some don’t. And it’s all seemingly random; it’s not like it’s all the people of one gender who get it, or just the people who somehow bullied or crossed the murderers earlier, or only the most annoying characters, or anything like that. And there’s even one case where a character is introduced as if we’re going to next learn about him, and he’s then shot almost immediately. So it’s not like we get to know roughly the same amount about each of the characters. Anybody could be shot, and it could happen at any time.

The senseless and random nature of it all extends to the motive. Various potential factors are present, but nothing you can really put your finger on to say that this is clearly why they did it.

Which again is like real life. The combination of adolescence and the typical American high school is one of those things like military training that can so warp people as to produce monsters, but predicting which people specifically it’ll be, predicting what form their monstrous behavior will take, and being able to establish a causal chain to explain it all is well beyond our current understanding.

So I think that aspect of the film is actually pretty honest. Some people might be dissatisfied that it’s all left open and unexplained like that, but can we explain a real case like Columbine much better?

Anyway, I thought Elephant was mostly effective in setting a creepy mood and presenting the violence in an emotionally powerful way that causes one to think about the relevant analogous real life issues. It was slow at times, and very slow at other times, so I can’t say I was fascinated all the way or loved this movie, but it’s worth seeing.