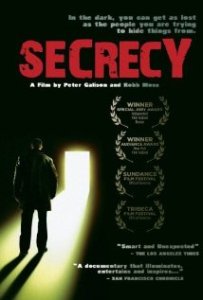 Secrecy is a documentary about the pros and cons of government secrecy justified (allegedly) by national security.

And it does indeed cover both the pros and cons, rather than being a simplistic brief for one side or the other. I would say it allots somewhat more time to those who contend that the pendulum has swung toward excessive secrecy, so it’s not strictly balanced in that sense (not that it should be—don’t get me started on the ridiculous misuse of terms like “objectivity” and “bias” in common discourse), but arguments and real life examples are presented for both sides.

I thought on the whole Secrecy was a well done documentary. The mix of arguments and examples is not ideal from the standpoint of cogency and education, but it is certainly closer to the ideal than you’ll normally see in a movie.

For one thing, most movies, including most documentaries, use examples as anecdotes designed to bypass rationality and influence viewers on an emotional level. I felt like with this movie, the examples are mostly illustrative of arguments rather than replacements for arguments.

I don’t know, though, how many people are really swayed by something like this, regardless of how well-reasoned or tendentious it is. It’s probably one of those emotionally powerful areas where people are going to cling to whatever they believe regardless. I doubt my opinions changed in any but the slightest, subtlest ways as a result of watching this.

I would like to have seen maybe some more explicit explications of and critiques of the presuppositions behind the various positions on secrecy. I have to think the overwhelming majority of Americans, whether they would articulate it this way or not, regard those in power, and especially those in intelligence agencies, as mostly good guys who are mostly well-motivated to keep Americans safe from the various nefarious folks and groups—internal and external—who aim to harm us as much as they can get away with.

And when the issue is framed that way, the pro-secrecy people can make a plausible case that if the good guys aren’t allowed to do things like operate in secret and use methods that the softer of our citizens would feel squeamish about, then they’ll be no match for our enemies—who after all put no such restraints on how they operate—and we will suffer for it.

The anti-secrecy folks in this movie I think do both, but the focus is more on the first, whereas my mind tends to go more toward the second.

As to the first, some good points are made in the movie concerning how dissemination of information can have intended and unintended benefits that outweigh the benefits of secrecy. Information is valuable, but some of that value comes precisely through sharing it. An agency that gets some kind of intelligence on a “terrorist” group it’s investigating will naturally want to keep that secret, since the wider it is disseminated the more risk there is that the group itself will find out it’s being watched and will alter its behavior in response. But how “secret” do you then keep it? Do you keep it secret from other agencies that might be able to use the information constructively? Do you keep it secret from lower level members of your own agency who are out in the field and could use this information to do their job more effectively? Do you keep it secret from scholars or even members of the general public who might be able to help interpret and use this information?

An interesting point is made along these lines that the Unabomber case was cracked precisely because so much information, including his own writings, was published in newspapers. Because the information was not restricted to some tiny set of law enforcement folks, his brother put two and two together and ratted him out.

But as to the second, I just don’t see the world that way. I don’t see the wielders of power in this country as folks who only as a last resort operate in darkness, and murder and torture, and break the law, and lie, and so on. I don’t think they reluctantly do these things only against evil enemies who fight that dirty and more so, and only in pursuit of laudable goals of keeping us safe and free.

I think they do such things for the same reasons people have always done such things throughout history. Perhaps I and other “regular folks” are safer as a result of all the lying and torture and gathering and hiding information, and perhaps not. But if we are, it’s as a largely incidental byproduct of policies and methods chosen for other reasons. I don’t think U.S. generals and politicians and bankers and spies and all the rest are good people reluctantly using unfortunate means because they love me and my freedom so much; I think they’re bad people—or at least no better than their counterparts in Hamas or China or the Ottoman Empire or on Mars—pursuing their own self-interest and the self-interest of the other most powerful people they represent in whatever way they think is most effective.

I don’t trust any of them for a second. I don’t believe that the reason U.S. officials and their proxies around the world have bombed, kidnapped, assassinated, waterboarded, chopped the testicles off of, terrorized, propagandized against, thrown into dungeons, and tortured with cattle prods millions upon millions of union organizers, teachers, clergy, students, farmers, and other people around the world who show even the slightest signs of being a threat to the current distribution of money and power, and as much as possible sought to do so in secret and hide it and lie about it, is that “Gosh, we love Philo so much that we’re willing even to do all this dirty work that we hate just to keep him free and protect him from the terrorists who next time might fly a plane into a building he’s in.” I don’t live on that planet.

And I’ll also say that even if there isn’t a total moral equivalence, the difference is largely attributable to the very sorts of people who oppose things like excessive secrecy. So as frustrated as conservatives might get in this country (or Europe or Israel or wherever), and as much as they might angrily denounce the naïveté of those who seek to make them fight the bad guys with one hand tied behind their back, if those opposition voices really were silenced or persuaded to change their minds, there would cease to be any difference between “us” and the “enemy.”

For even if the good guys start by using ugly tactics only reluctantly and as a necessary evil—they don’t, but let’s pretend—if they are given unlimited power to do what they think is best with no oversight, no exposure, no criticism, they’ll be fully corrupted by that power soon enough.

So I think Secrecy makes some very good points, and it gets one thinking about a lot of important things, but I suspect most viewers will, like I, be reminded of what they already thought going in, and their reflections will follow the path they’re used to. That’s not a fault of the movie; I think that’s just human nature when we’re dealing with issues of this sort.