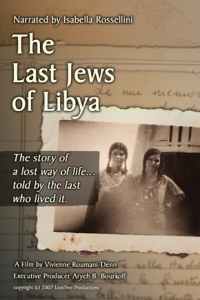 The Last Jews of Libya, which is fifty minutes long, is of a personal history style. It consists of on-camera interviews with surviving members of a Jewish family talking about the recent history of the family, supplemented by photos and film clips of their life and times, as well as readings from the memoirs of a no longer living family member. (The readings, and additional narration, are provided by Isabella Rossellini. Other than the presence of a name actress, the film feels like a modest, maybe academic documentary. I gathered from how she is addressed in at least one of the interviews that the filmmaker is herself a member of the family.)

The story begins in the early 20th century, with the family living in Benghazi, Libya. There had been, as the film points out, a significant Jewish presence in what is now Libya for well over 2,000 years.

The film traces the family’s travails throughout the rest of the century, and also puts it in the context of the history over those same years of the Libyan Jews, and indeed of the Jewish people in general. (Much like Roots is about a specific family, but also about the African American experience in history in general.)

Even without the broader history, this would be a very worthwhile film, just for the family and those close to them to have. As someone who has developed a keen interest in personal history, I love when someone uses their filmmaking skills to preserve the stories of people’s lives in their own words, as a record that they were here and that they mattered. So putting together a solid film that achieves that is to be commended in itself.

But the inclusion of the historical context of course gives it potentially a much wider appeal. Indeed, purely as personal history it’s fairly thin. There’s a limit to how thoroughly you can document people’s lives when you have only fifty minutes and a significant number of family members to cover, and that limit is lowered further when you decide to devote considerable time to telling what was going on in the world and to Jews in general during that period.

So, for instance, I did not end up with a clear portrait of the family members as individuals, where I could now list them and give a capsule biography of each. I found myself thinking a lot more about the larger issues of the history of the Jews in the twentieth century. I wouldn’t say that necessarily reflects the fact that the film did a better job on that general history than as a personal history of the family; I think it’s more that as a non-family member myself it was natural for me to take more of an interest in the broader issues.

Though I don’t know about the project in detail, I’d like to think that the filmmaker made a much, much longer film out of her interviews for the family, and that this documentary for a general audience is just the top 10% or whatever of highlights of that project, supplemented by the wider historical material and the Rossellini narration and such.

Anyway, I think the film does a very nice job of conveying the seemingly perpetual precariousness of Jewish life. The Jews in Libya had an uneasy relationship with the majority Arabs over the centuries. There was not constant oppression, and for significant periods things would pretty much be fine and the communities would get along, but you never knew when trouble would arise, culminating in occasional pogroms.

Pogroms are mentioned in almost a matter-of-fact way—mostly referring to the Jews in Libya but not just there—but let’s stop and think what those are. The scale of the pogroms is not mentioned, so I don’t know if we’re talking about typically massacring half a percent of the Jewish community, forty percent, or what, and certainly whatever the scale is it’s not comparable to the Nazis’ sustained efforts at total extermination, but it’s still a very big deal. Besides however many people are killed outright when racial and religious hatred is unleashed as a pogrom, there are obviously massive rights-violations short of death, including severe injuries, theft, vandalism, expulsion from jobs and schools, etc.

Perhaps it just reaches a point where they’re sufficiently commonplace that their horrific nature ceases to horrify in the way one would expect, and so people do indeed refer to them rather matter-of-factly, like epidemics before modern medicine and public health greatly diminished their force. Obviously it’s a terrible and hurtful thing when influenza or whatever breaks out in your community every so often and takes members of your family and people you love, but it’s also something you get used to as a part of life, just one of the many things that can go wrong.

You wonder how people can even go on in a situation where periodically mobs swoop down on their community and end some lives and destroy a lot more, but I guess they do so the same way people continue to live where there are malarial mosquitoes or continue to drive cars every day even knowing a certain percentage will be killed or maimed on the road each year. It’s just one of the bad things that happen in life.

Anyway, so their situation is mixed in Libya. Then the Italians conquer the country, and the Jews mostly welcome the Italians, thinking maybe an advanced European country will be more tolerant of them than the Arabs are. For a time that’s somewhat true. Evidently Jews breathe a tiny bit easier under Italian rule in Libya. But as the Italians ally themselves more closely with the Nazis, the plight of the Jews in Libya shifts to where it’s as bad as it was before the Italians arrived, and then beyond that to where it’s clearly worse.

Which leaves the Jews now mostly rooting for the Allies in North Africa. (And after that, welcoming the American presence of a military base and foreign oil companies and such.) Unfortunately as the postwar period unfolds and Arabs regain power in Libya, they remember that the Jews seemed to try to “pick the winner” and side with each invader, and now the relationship is worse than where it was before all this recent history.

Most of the family leaves over time, some to Israel and some to America. Not that that solves all the problems and leaves them feeling secure. For one thing, they find that Israel and the Jewish community in America tend to be dominated by European Jews, and indeed that some even regard them as not “really” Jews. But beyond that, Israel is constantly fighting with its neighbors and its internal Palestinian population, and even in America or other First World countries you can never really relax and know that as a small, high profile, only partly assimilated community, you won’t eventually be targeted again. So safety and security remain elusive.

And then the Jews who remain in Libya have to deal with the fact that whenever war breaks out or there is a state of high tension between Israel and the Arabs, the Jewish minority in Arab countries provides a convenient target for people’s rage.

Ultimately no member of the family remains in Libya, and indeed it is stated in the film that by now no Jews period live in Libya. (I’m not sure how they would know that. It may be there is no Jewish community per se in Libya, but I’d be surprised if there were literally not a single person—including the non-religiously observant—of Jewish ethnicity in the whole country.)

The Last Jews of Libya held my interest moderately well. It wasn’t always the most scintillating of material, and it was put together in a competent but not spectacular or attention-grabbing manner. But I certainly came away from it appreciating that someone had taken the time to tell this story well worth telling, and to create a film that provides a lot to think about.