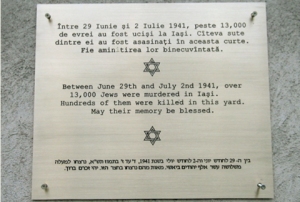 Charging the Rhino has a lot in common with The Last Jews of Libya, which I wrote about recently, both in content and in style.

Both are part personal history film and part historical documentary. Both have to do with the Holocaust in general, and the pre- and post-war fate of the Jews in one country in particular (Libya in one case; Romania in the other). Both focus on a particular Jewish family, and both filmmakers are surviving members of that family. One notes that a once-thriving Jewish population in Libya has been reduced to zero; the other that the Jewish population of Romania has dropped from 700,000 or so before World War II, to about 10,000 mostly elderly folks today. One augments tales of Fascist anti-semitism and murder with that of Arabs; the other with that of Soviet-style Communists. Both are told in a fairly straightforward, serious, understandable manner, with little or no excessive artsiness, surrealism, humor, or anything like that. They are almost the identical length.

No doubt both film projects are very admirable and very worthwhile. I found, though, that in spite of all their similarities, and in spite of having liked The Last Jews of Libya, I liked Charging the Rhino noticeably more.

As to why this documentary got through to me even a little better than the earlier one, I think I can identify at least some of the reasons.

In this film, the filmmaker personalized it more by appearing on camera and making it in part his story. He also provides his own narration, whereas the earlier film used an actress as narrator. I felt a little more emotional connection to the filmmaker and what he was relating through his film as a result.

In this film, two people—the filmmaker’s father and his cousin—get almost all the focus, whereas The Last Jews of Libya spread itself more thinly by covering a larger number of family members.

Furthermore, both the father and the cousin have especially striking stories that make them even easier to remember—the father survived a mass execution of Jews when he was rescued from the corpses with a bullet lodged in his chest alongside his heart, which remained there for the several more decades he lived, and the cousin was executed as a bank robber by the post-war Communist regime in Romania—whereas although plenty of interesting and tragic things happen to various family members in The Last Jews of Libya, the stories didn’t grab my attention and stick in my mind in quite the same way.

I also think in this film the storytelling about the cousin and the bank robbery in particular was maybe a little more sophisticated in the way it trickled out the details so as to create some suspense and raise some questions to be resolved later. In general, narratively this film feels just a little more like it was put together by a more advanced and confident filmmaker.

In addition, there was a bit more of a story to the contemporary events in this film. Part of what this film does is follow the filmmaker and his sister back to Romania as they do things like try to reclaim lost family property, and create some kind of memorial for the murdered Jews. I don’t recall The Last Jews of Libya having anything corresponding too closely to that additional dramatic element.

I applaud and recommend both films, though if for some reason a person could only watch one of them, I’d pick Charging the Rhino by a slim margin.